After inundating you with posts about my wedding, and therefore, my feelings-- you will now be rewarded with several posts that centre on my other husband: food.

Now. Please note that, before we proceed, the title of this post is misleading in that it seems to imply that I consider myself a food critic. That I researched online forums, or Top 10 Burgers in NYC! articles, and narrowed down my selection to the five that you will read about below. That I took notes on the kind of bun; the part of the cow that went into making the patty; the secret recipe sauces used.

I pretty much a) love burgers b) went to NYC for my honeymoon partly because there are lots of burgers there (and pizza!) c) and ate some burgers.

The following choices are a mish-mash of recommendations from friends, from the internet, and mostly, from stumbling into restaurants, blind hungry, and thinking that the burger option was the best one on the menu (which is usually my line of thinking--except for that little part where I have tried to avoid wheat for the last two years, oh yeah that.)

#1: The Burger from Five Leaves


This triangular-shaped restaurant had been recommended to us by our AirBnB hosts, and was a 10 minute stroll from our Greenpoint apartment. Before he passed away, Heath Ledger had intended to open a restaurant/ bar in Brooklyn, where American/ Australian, organic fare would be served. His plans were followed through by two of his friends, and now Five Leaves frequently has a long waitlist at the busiest times of the day. Bonus: they seriously have the kindest servers we met while in NYC. 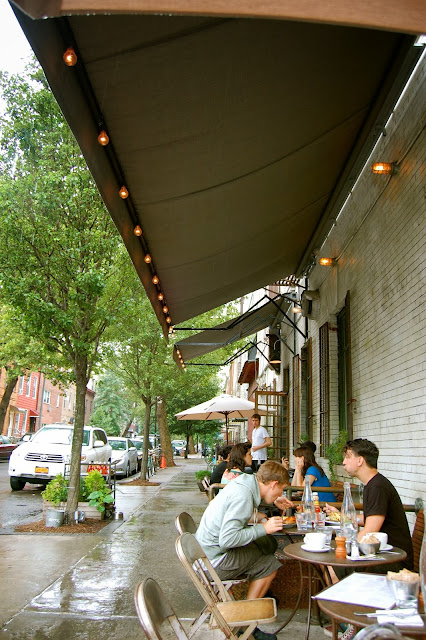 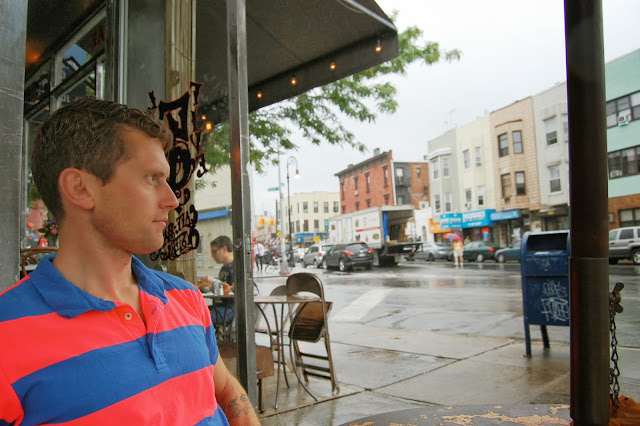 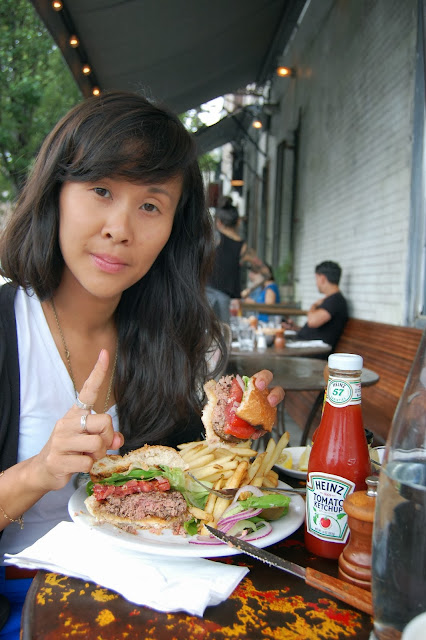 This burger was the first thing I put in my mouth after landing in New York.  My body was completely confused as it had been woken up at 3am, stuck in a plane for five hours, and then, upon landing, told that it was suddenly three hours ahead in Time Zone than what it was used to.

This juuuuuuuuicy patty was able to revive me back from a state of travelling-Hell, and probably hydrated me as well. I was too chicken, at this point, to get the infamous Five Leaves Burger (hint: Burger #5 on this post), so I played it safe and stuck to the basics.

It is a simple creation, with grass-fed beef, harissa mayo and comes with salad or fries. I opted to move up the food chain and ordered truffle fries. My belly was very happy.

#1.5: The Lamb Burger from Smorgasburg

This burger adventure almost doesn't count. Because of how much we ate at this food fair (fried chicken, a slice of fried cheese on potato, slow cooked pork, taco AND this), I do not remember any of it. I can't remember what the name of the stall was. It was good. It was lamb-y. I like lamb. 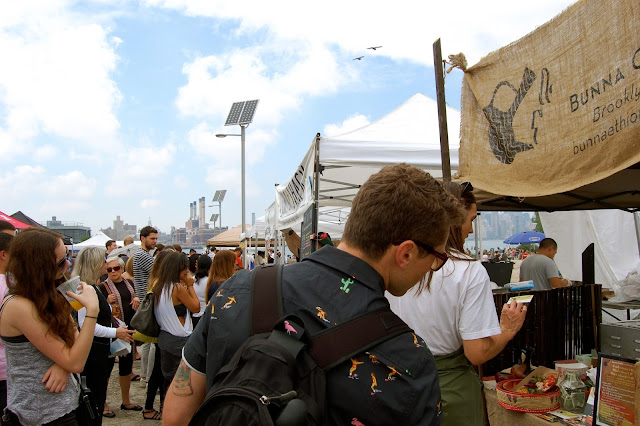 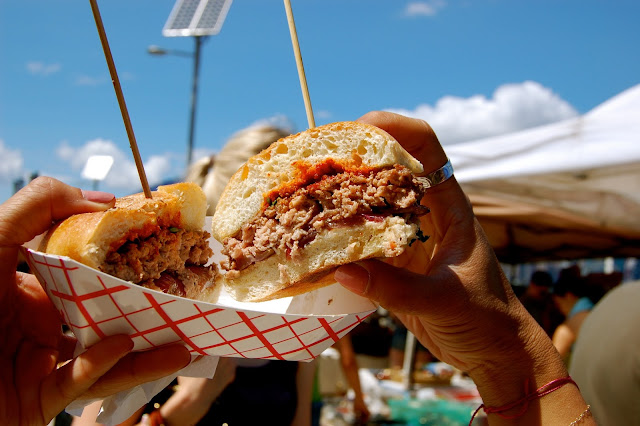 #2: The Lamb Burger from The Breslin 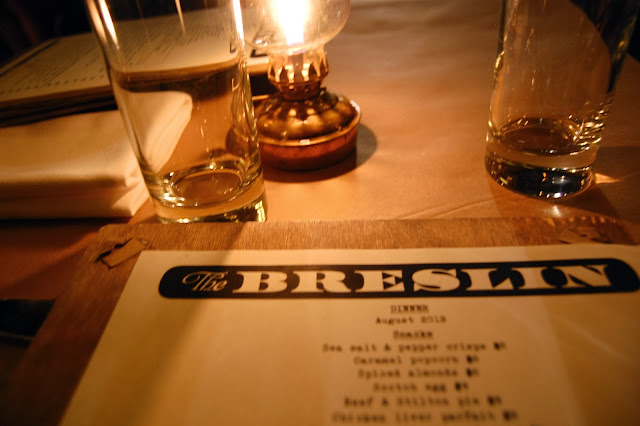 I am going to ruin the surprise for you, and just tell you straight up that this was, by far, both of our favourites of the burgers we tried. That may not mean much, as we only had 5ish (lay OFF okay, did you want me to die?? Between the pizzas and the pastas and the donuts I had to consume, I was seriously on wheat-overload), but I think that even if I were to have 1000 more in my remaining days, this burger would still sit somewhere high on my list.

It helps if you love the baby sheep, like I do. (Were you observant and noticed that we ate TWO lamb burgers in one day? Slaughter.) It also helps that it came with a slab of feta, and thrice cooked chips.

Thank you, Maggie Liu, for the recommendation.

It is also worthy to note, that this British-pub-styled restaurant was located in the ultra-hip Ace Hotel, and you can wear whatever you frickin' want. (We had, of late, been nervous about being under dressed after going into establishments where not having a suit jacket seemed to be frowned upon.) Yay for freedom of attire, the beef & stilton pie, and perfectly salted chargrilled meatstuffs!!! 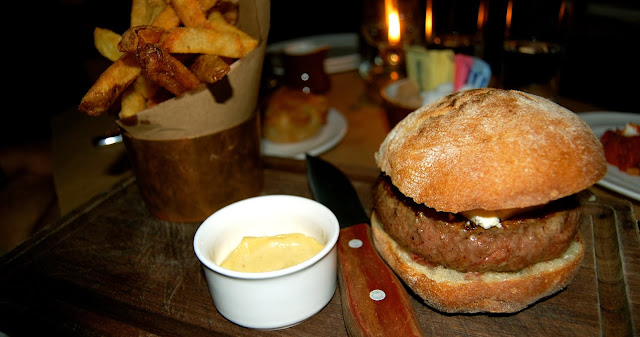 #3: The Burger from Shake Shack 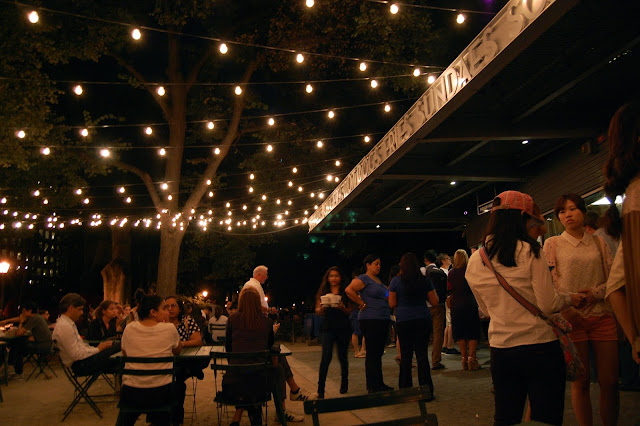 You have no idea how much I was looking forward to this particular meal. A long time reader of Robyn's site, The Girl Who Ate Everything, I had seen so many pictures of her beloved spot in NYC, with its fast-food style gourmet burgers, topped with a side of cold custard. I mean, the Shack Stack is a Cheeseburger AND 'Shroom burger ("crisp-fried portobello mushroom filled with melted muenster and cheddar cheeses"), topped with lettuce, tomato and Shack Sauce. AND. 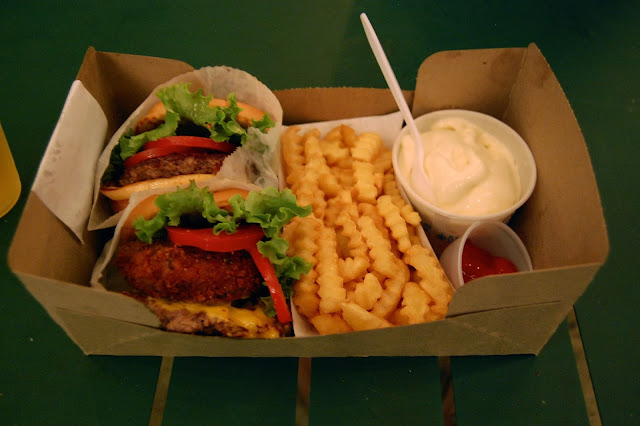 Like many things that you anticipate for in life, this one was a bit of a flop. Maybe because it was 10pm and neither of our bellies were doing so hot; maybe because we waited in line for 25 minutes to even place our order (which is short, compared to their lineups during the meal times of the day). It was sort of just...... meh. I think we had gotten spoiled with such luscious, thick patties, and here was one that, while it was 100% hormone, antibiotic free Angus beef, was thin. Thin doesn't yield a lot of juiciness, for me. 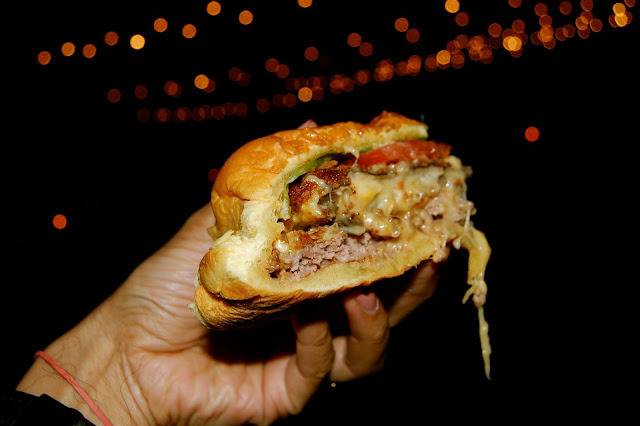 This makes me sad. I don't want to think about it anymore. Maybe I will give them a second shot one day, and my life will have meaning again.


#4: The Burger from Minetta's Tavern


Around our last week in New York, I started to panic. My iCal was telling me that I had five days left in this city that has been so good to me (this was my 4th visit to the grande pomme); this city that I probably wasn't coming back to in the near future. There were only a handful or lunch or dinner slots left available, plenty of other non-burger foods to be satiated with--- was it time to seek out The Ultimate of all burgers??

The burger at Minetta's Taverns tops most of the official and unofficial burger aficionados lists', if you do a routine search on Google. This iconic New York joint has been around since the 1930's, and used to be frequented by such heavy hitters as: Ezra Pound, Ernest Hemingway, e.e. Cummings. 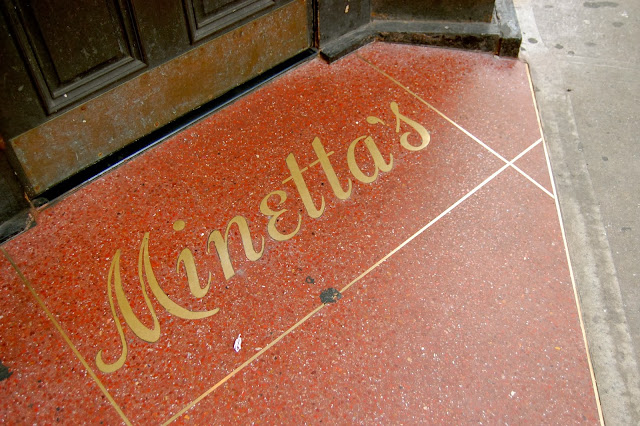 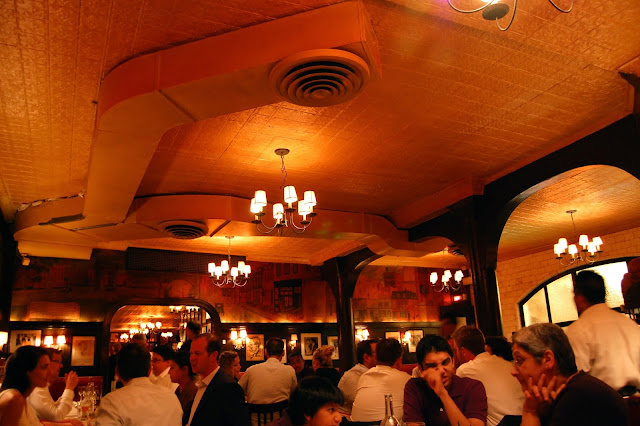 On the inside, there is definitely an old world feel, with its red velvet curtains that rope off the dining room, and the caricatures and photos of famous patrons that line the walls. It is definitely a place where you need to make a reservation in advance, or risk being left to mope around to search for your closest gyro counter before hanger hits you.


Bry and I order different things at restaurants; it is undeniably smarter, if you are secretly a fatty who wants to try everything, and has a wandering eye. On this particular evening  however (6pm to be exact), we both zeroed in on the item that Minetta's is infamous for:

A blend of dry-aged rib eye, skirt steak and brisket, seared to a crispy outside and a medium rare inside. Sesamed brioche bun. Topped with a heaping of caramelized onion. 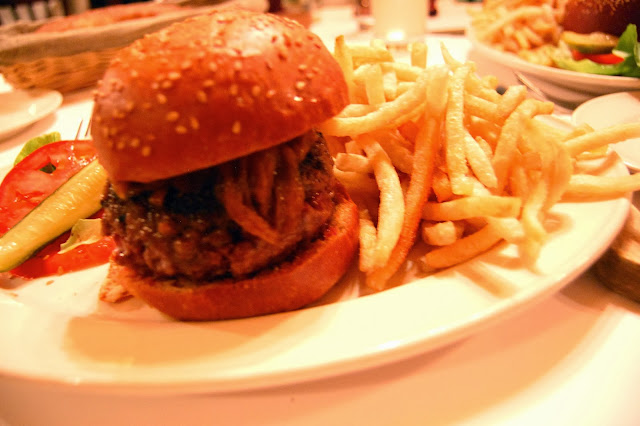 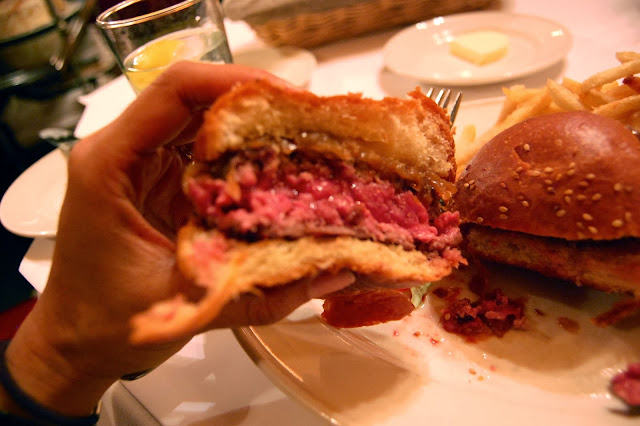 I so wish that I could report back that this burger changed our lives. It was good. It was seasoned well. The bun soaked up all the meat juices nicely. I just... for twenty-six dollars?

I'm glad we got to experience it. Wouldn't do it again. (The fries were epic, however.)


#5: The Other Burger at Five Leaves 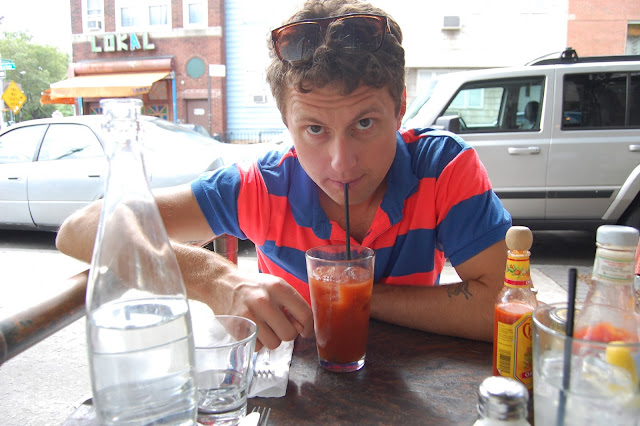 15 days after our first encounter here, we decided to have our last meal in New York at the same place that we dined at for our inaugural meal. For this occasion, B chose to wear the same outfit he did on the last visit (though you can clearly see how fast his hair grows in two weeks), thus making perfect bookends of our decadent honeymoon.

I was compelled to come back because I had cowered away from the the Five Leaves Burger on my initial visit. I thought about it many times over the two weeks, and knew that I couldn't leave without having tried it. Trust me when I say that you cannot judge a burger by the reading or eyeballing of its ingredients; you must try the beast for yourself. 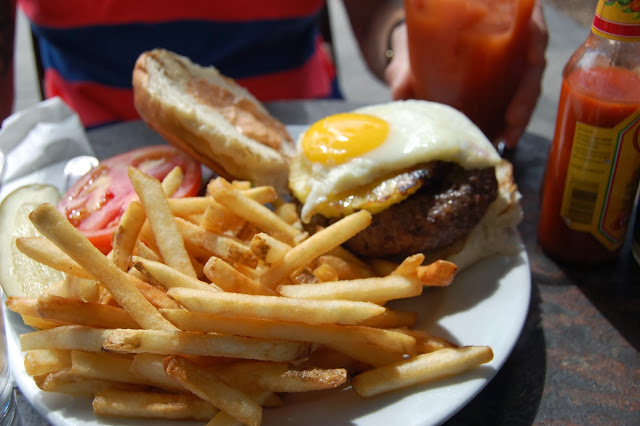 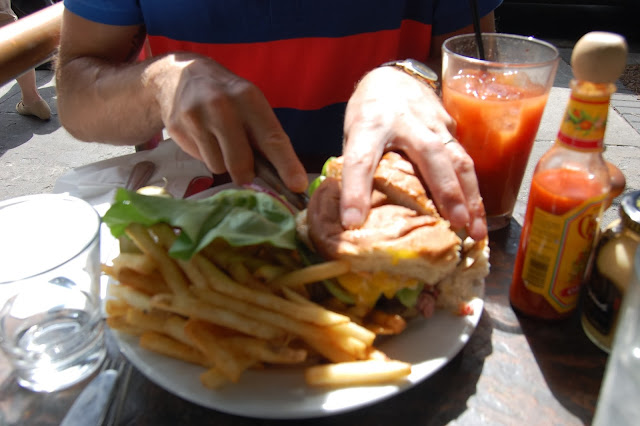 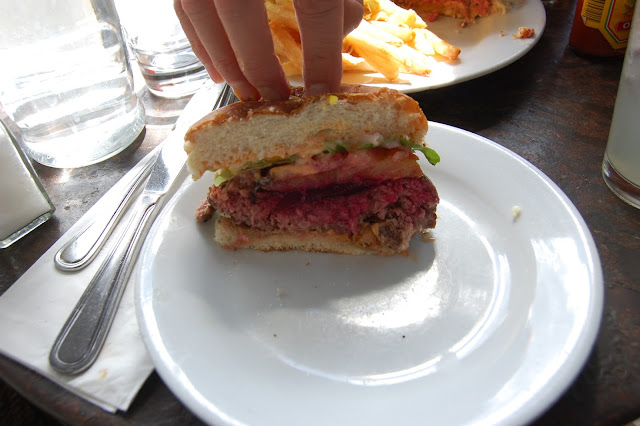 The pictures above signify the colossal mistake I made.

I agreed to split the burger with my husband.

This was a really tasty contender, folks. Its weirdness combined in eclectic harmony to marry together the sweet, sour, salty natures of its separate parts. Not to mention the gooeyness from the egg, that created its own sauce. I had three bites of goodness, and then it was gone.


In the year leading up to the wedding, I had some bemused and surprised reactions from people when I told them where we were heading to for the mielmoon. I guess the usual answer is somewhere romantic and tropical, like Hawaii or Tahiti.

Personally, I can't think of anything more romantic than going on a burger tour with my husband, as we waddle from joint to joint, clutching our stomachs in joy and pain. High fives, babes.

What about you? Have you tried any of these joints, and care to agree or disagree or recommend another one?
Posted by thebeejays at 9:02 PM